While the national minimum wage did rise roughly in step with productivity growth from its inception in 1938 until 1968, in the more than five decades since then, it has not even kept pace with inflation. However, if the minimum wage did rise in step with productivity growth since 1968 it would be over $24 an hour today, as shown in the Figure below.[1] 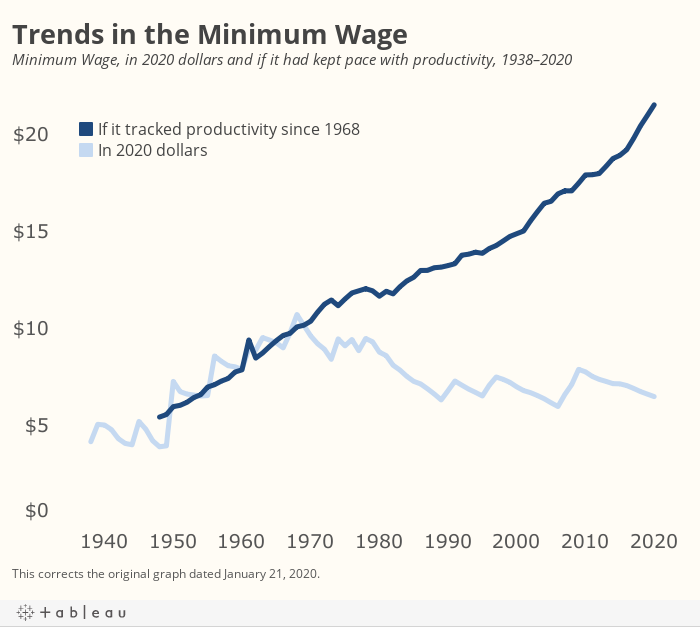 It is worth considering what the world would look like if this were the case. A minimum wage of $24 an hour would mean that a full-time full year minimum wage worker would be earning $48,000 a year. A two minimum wage earning couple would have a family income of $96,000 a year, enough to put them in the top quintile of the current income distribution.

There is some truth to this claim, but only at a superficial level. The productivity of any individual worker is determined not just by their skills and technology, but also by the institutional structure we put in place. In a world without patent and copyright monopolies, the skills of bio-technicians and software designers would likely be much less valuable than they are today.

Similarly, the skills of experts in stock trading and designing complex financial instruments would have much less value if we had a financial transactions tax in place and allowed large banks to fail when their mistakes made them insolvent. And, the skills of doctors and other highly paid professionals would have much less value if our trade policy was as committed to subjecting them to international competition, as has been the case with auto and textile workers.

Lower pay for those at the top increases the real pay for those at the bottom and middle. A $15 an hour wage goes much further when all drugs are selling as low costs generics, the financial sector is not sucking 2 percent of GDP ($230 billion a year) out of the economy, and doctors get paid the same as their West European counterparts.

It is quite reasonable to have a target where the minimum wage returns to where it would be, if it had tracked productivity growth over the last 50 years. But we will have to reverse many of the institutional changes that have been put in place over this period to get there. This is where the sort of policies described in Rigged (it’s free) come in, but that is a much longer story.

[1] This calculation uses a productivity growth figure that is economy-wide, is based on net output, and adjusts for differences between the NDP deflator and the consumer price index. These issues are discussed in more detail here.