This year’s Social Security and Medicare trustees’ report saw very few changes from last year’s report and showed that the Social Security retirement program’s (OASI) financial situation had improved modestly by some measures. While the report predicts that the Social Security retirement program will be able to pay 77 percent of benefits starting in 2034 (down from 79 percent that was reported in 2018), the trustees’ own rationale shows that the future of the program is secure with minor adjustments. Let’s walk through the logic.

In the report, the trustees forecast that the trust fund will have a shortfall of 2.78 percent of payroll under their intermediate assumptions over 75 years (Table VI.G3). This is to say that to erase the shortfall throughout this period, payroll taxes will need to be increased by 2.78 percent. This calculation is an improvement when compared with the projected shortfall of 2.84 percent of payroll that was reported in the 2018 report.

While the new projected payroll tax is less than the projected payroll tax from the previous report, it would still imply a decrease in after-tax income assuming that the payroll falls solely on employees (virtually all economists accept that the employer’s share of the payroll tax comes out of workers wages). Although Social Security taxes on the typical worker’s income is in no way inconsequential, especially for low-income workers, this increase in taxes is completely swamped by higher wages.

In the previous report, the trustees predicted the average real wage will be 52.3 percent higher in 2048 than it is today (Table V.B1). In the current report, average wages have increased by an additional 0.2 percentage points, bringing the rise in the projected real wages to 52.5 percent over the next 30 years. Average wage growth trumps the size of any potential losses from the increase. Simply put, it is more important to ensure workers are getting a bigger piece of the pie than worrying about whether taxes will rise.

The figure below compares the average wage growth to the tax increase needed to keep Social Security funded.

The next figure presents the changes in wages within the next 30 years, starting with a salary of $50,000. A salary without the Social Security tax deducted is projected to grow to $74,048 by 2048. Under current law, the salary would grow to $69,457 after 30 years, and with Social Security fully funded it would be $67,399. The difference between these two salaries over time is not trivial, but it shows that 1) fully funding Social Security is not an insurmountable burden and 2) wage growth is much more important than worrying about whether taxes will rise. 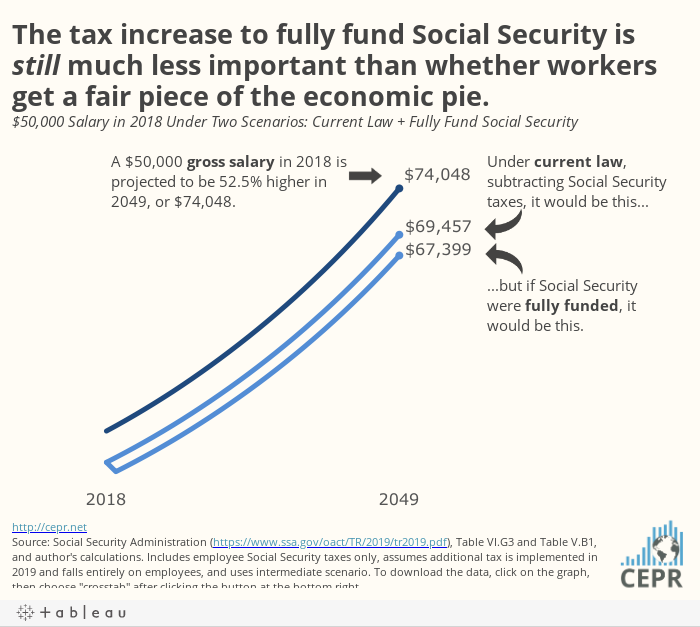 Despite this somewhat positive situation, there are some caveats to the report as well. There is a huge amount of uncertainty about the future and what the economy will look like. The legislators who enacted Social Security would hardly recognize what the economy looks like today, but they would still share the same principle — that people should have a secure retirement — that progressives hold today. With that degree of uncertainty, it’s hard to conclude what the future holds, but since shortfalls can be easily closed, it makes little sense to overreact to events that may or may not happen in a 75-year time frame. While the trust fund has a sound logic behind it (the government taxes working people and subsequently puts that money in the trust fund), it’s important to realize that this is not the way that government spending works. If it wanted to, the government could allocate enough money into the trust fund without changing taxes at all as long as there are enough resources in the economy.

As a policy matter, the shortfall in Social Security’s trust fund can be easily solved, either by a modest tax increase as described, or by the government simply putting money into the trust fund (or otherwise committing to fully fund the program). And since the program is vital to so many Americans, there are also clear ways it could even be expanded. The difficulty, of course, is not that we don’t know how to solve these problems, it’s that we need to convince politicians to make these changes. And since the trustees of the program agree with the analysis presented here, it’s time to start.