The infamous HAMP program, which the Administration revised so many times on the fly as to give incompetent and mendacious mortgage servicers air cover for failing to modify mortgages, at least had a stealth purpose. As Treasury Secretary Timothy Geithner said to the SIGTARP’s Neil Barofsky, it was to foam the runway for banks by spreading out foreclosures over time. But that still doesn’t excuse servicers for their favorite gimmick for not bothering with HAMP applications, which was to pretend they’d never received them.

But it’s not clear what the thinking was behind the 2007 Student Loan Forgiveness Program, except to create better eyewash. 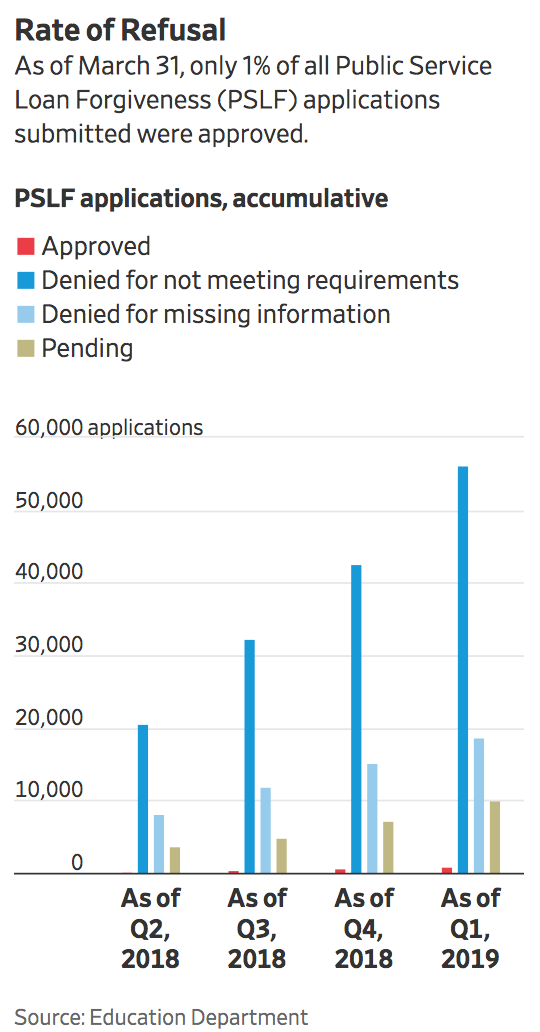 The ostensible goal was to give student debt relief for borrowers who went into socially useful but not>well remunerated lines of work. But not only were the eligible employers (note employers, not job types) poorly specified as “public service” which includes some highly paid employees at not-for-profits, other elements of the program were also drafted badly. Throw in lousy servicers, revisions to an already confusing program, and conservative sabotage into the mix, and you’ve created conditions where many make what they think are the qualifying 120 payments, only to have their application for forgiveness nixed. Only 1% of 73,000 applicants have gotten relief.

Admittedly, 25% of the rejections were due to “missing information,” which means some might eventually be approved. But as of June 30 last year, 29,000 applications had been reviewed and only 1% were approved, with 28% needing more information. You’d think by now that if a meaningful percentage of the then 28% with gaps had had them filled, the proportion being approved would be rising over time.

The broad outlines of the abject failure of this scheme aren’t new but the Wall Street Journal provides a useful overview and update. The program, launched in 2007, created a series of conditions for eligibility. Per the Journal:

To qualify for forgiveness, borrowers must work for a government entity or nonprofit, hold a certain type of loan, enroll in one of several specific repayment plans and make 120 full and on-time monthly payments, or 10 years’ worth. Falling short on almost any of these requirements can mean disqualification.

The article describes a litany of problems. First, only students who had Federal student loans qualified, not ones with private Federally guaranteed loans. Servicers too often enrolled borrowers into forgiveness programs for which they did not qualify or gave incorrect payment amounts.

And even though the Trump Administration has made its antipathy for the program evident by eliminating it in its budget announced in March, it’s not as if the Obama Administration did all that much to make it work. Again from the Journal:

At that point, with the first borrowers not eligible for forgiveness for seven years, the Obama administration put off specific steps that would have helped the program run smoothly. Officials didn’t advertise the program or establish a platform to guide borrowers through its requirements. They didn’t draw up clear guidance on which employers should qualify as public-service organizations—now a subject of litigation. A government investigation last year found that officials didn’t even produce a guidebook for the servicing company they hired, Fed Loan, to implement the program.

And measures designed to make borrowers whole for program screw-ups that did them harm have wound up being close to moribund:

[Public librarian] Ms. [Bonnie] Svitavsky hit her first snag in 2013, when she submitted a form to ensure her employer qualified her for loan forgiveness. It did, but that step revealed another problem: For the prior 23 months, her servicer, like with so many other borrowers, had her on a plan known as extended repayment, which charges standard monthly payments over 25 years. Those payments were now all ineligible toward her payment count.

The improper payment plan issue raised particular concern in Washington, where members of Congress, led by Sen. Elizabeth Warren (D., Mass.), in 2018 created a temporary fund of $700 million to reimburse borrowers who had mistakenly enrolled in ineligible repayment plans but otherwise qualified. The program has so far granted loan relief to 442 additional people.

If you generously assume an average borrower put $10,000 into the extended repayment scheme, only $4 million of the $700 million set aside has been deployed.

Mind you, this isn’t even the complete litany of things that can or have gone wrong with this program. Readers have described how they were encourage to consolidate loans to help qualify for the program…..only to find the new loan wasn’t eligible and had higher interest charges.

It is distressing to see the intensity of the hostility in the Wall Street Journal comments section to the idea giving a break to borrowers. There’s no acknowledgment that students could have had their employment prospects up ended by the crisis or been misled by their university about how realistic it would be for them to earn enough to repay their loans. A few readers did point out the escalating cost of higher education was the real problem, but the “how could you be so stupid as to get advanced degrees and then become a librarian?” viewpoint drown it out (never mind that a Harvard College colleague said the degree she got later in library science was the most useful education she’d ever gotten; she parlayed that into a research job at Bain and later a position as head of white label research at one of the major international equity firms).

I hope large scale debt forgiveness doesn’t wind up falling into the Maine category of “You can’t get there from here.” But the experience to date is not encouraging. The fact that so many hurdles were set up to make sure that only very deserving candidates could qualify illustrates how few better off individual are willing to consider that stagnant real incomes, rising housing, medical and education costs, and high job instability means that most people go from paycheck to paycheck and can’t build up a savings buffer. They are one mishap away from needing to borrow to get by. If they aren’t lucky enough to be able to get the funds from family or friends, the bank supplied sources range from pricey (credit cards) to punitive (payday loans). And if you miss a payment due to a second mishap, it’s well nigh impossible to get off the treadmill of penalty rates.

But as long as the well-off can convince themselves that overburdened borrowers were irresponsible, as opposed to unlucky, nothing much will change until pitchfork sales go way up.

What Does Patriotism Really Mean?…

How Workers Can Reclaim Power…