A Tumultuous Year Leads To A Telling Quarter

Vale S.A. (VALE) has had a tumultuous year so far, with the deadly Brumadinho dam disaster which led to the resignation of CEO Fabio Schvartsman in March, and the appointment of new CEO Eduardo Bartolomeo (pictured in Vale’s tweet below) in April.

With Vale’s Q1 earnings scheduled to be released later this week, Seeking Alpha contributors F-Stat Research Partners consider this quarter of paramount importance to Vale. In their conclusion, F-Stat suggests the market hasn’t factored in the potential upside for Vale in the wake of its dam disaster earlier this year:

Vale is a quality firm with quality assets that has experienced a large catastrophe in 2019. While the reduced production outlook of 98.2m MTs is expected to significantly impact earnings, we believe that the market has not yet factored in the possible upside scenario from rising recoveries and the ramp-up from development in the Northern System.

Although the stock market may not have factored this in, options market participants seem to have grasped the potential upside over most the rest of the year. That’s something I noticed when scanning for hedges for Vale shareholders looking to stay long while limiting their downside here, as I elaborate below.

As a reminder for new readers, you hedge when you are bullish on a security, but want to limit your downside risk in the face of uncertainty. So these hedges are for Vale bulls. If you’re bearish on Vale, there’s no reason to be long the stock. With that said, for these two examples, I am assuming you are willing to risk a drawdown of up to 20%, but not more than that over the next several months. The screen captures below are via the Portfolio Armor iPhone app.

As of Tuesday’s close, these were the optimal, or least expensive, put options to hedge 1,000 shares of VALE against a >20% decline by late December. 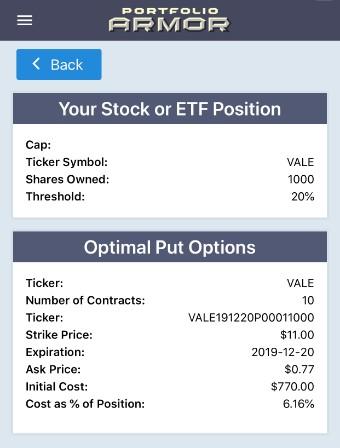 The cost here was $770, or 6.16% of position value, calculated conservatively, using the ask price of the puts (you can often buy and sell options at some price between the bid and ask).

If you were willing to cap your upside at 20% by late December, this was the optimal collar to give you the same downside protection as the previous hedge over the same time frame. 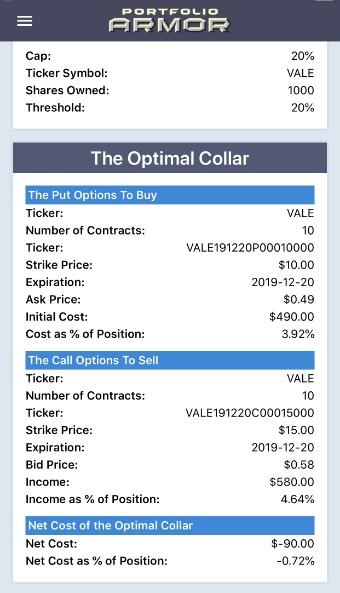 So the net cost here was negative, meaning you would have collected a net credit of $90 when opening this hedge, assuming you placed both trades at the worst ends of their respective spreads.

As I mentioned above, the options market appears to grasp the potential for upside in Vale over the next several months – you can see that in the negative cost of the second hedge, when capped at 20%. A comparison with Vale’s peers here is instructive. Neither Rio Tinto (RIO), nor BHP (BHP), nor Freeport-McMoRan (FCX), nor Cleveland-Cliffs (CLF) have a negative hedging cost when hedged using similar parameters (an upside cap of 20% and a decline threshold of 20%). Some of those peers, such as RIO, are cheaper to hedge with optimal puts than VALE, suggesting that options market participants see a greater potential for large swings in either direction for VALE over the rest of this year.

This article focused on hedging Vale, but in my Marketplace service I combine cost effective hedging with security selection that generates alpha. You can see the results in my latest performance update.

Disclosure: I/we have no positions in any stocks mentioned, and no plans to initiate any positions within the next 72 hours. I wrote this article myself, and it expresses my own opinions. I am not receiving compensation for it (other than from Seeking Alpha). I have no business relationship with any company whose stock is mentioned in this article.