Yves here. This post takes up a theme we’ve argued: that the only way to greatly reduce greenhouse gas emissions is radical conservation. No other approach could make enough of a difference quickly enough. Ilargi makes a more radical version of the argument that reduced energy use is ultimately the only remedy.

If I’ve said once that those among us who tout renewable energy should pay more attention to the 2nd law of Thermodynamics, I must have said it a hundred times. But I hardly ever get the impression that people understand why. And it seems so obvious. A quote I often use from Herman Daly and Ken Townsend, when I talk about energy, really says it all:

“Erwin Schrodinger (1945) has described life as a system in steady-state thermodynamic disequilibrium that maintains its constant distance from equilibrium (death) by feeding on low entropy from its environment – that is, by exchanging high-entropy outputs for low-entropy inputs. The same statement would hold verbatium as a physical description of our economic process. A corollary of this statement is that an organism cannot live in a medium of its own waste products.”

Using energy produces waste. Using more energy produces more waste. It doesn’t matter -much- what kind of energy is used, or what kind of waste is produced. The energy WE use produces waste, in a medium of which WE cannot survive. The only way to escape this is to use less energy. And because we have used such an enormous amount of energy the past 100 years, we must use a whole lot less in the next 100.

We use about 100 times more energy per person, and a whole lot more in the west, than our own labor can produce. We use the equivalent of what 500 billion people can produce without the aid of fossil fuel-powered machines. We won’t solve this problem with wind turbines or solar panels. There really is one way only: cut down on energy use.

Because it’s exceedingly rare to see this discussed, even among physicists, who should know better since they know thermodynamics, it’s good to hear it from someone else. An article in Forbes today discusses a May 3 article in German magazine Der Spiegel on the problems with the Energiewende, the country’s drastic turn towards renewables.

The Forbes article is written by Michael Shellenberger, President of Environmental Progress and Time Magazine “Hero of the Environment.” (sigh..) Let’s take a walk through it:

Over the last decade, journalists have held up Germany’s renewables energy transition, the Energiewende, as an environmental model for the world. “Many poor countries, once intent on building coal-fired power plants to bring electricity to their people, are discussing whether they might leapfrog the fossil age and build clean grids from the outset,” thanks to the Energiewende, wrote a New York Times reporter in 2014. With Germany as inspiration, the United Nations and World Bank poured billions into renewables like wind, solar, and hydro in developing nations like Kenya.

Oh well, perhaps we shouldn’t expect journalists and politicians to understand the world they live in. They’re mostly into feel-good items, that’s a job requirement.

But then, last year, Germany was forced to acknowledge that it had to delay its phase-out of coal, and would not meet its 2020 greenhouse gas reduction commitments. It announced plans to bulldoze an ancient church and forest in order to get at the coal underneath it. After renewables investors and advocates, including Al Gore and Greenpeace, criticized Germany, journalists came to the country’s defense.

“Germany has fallen short of its emission targets in part because its targets were so ambitious,” one of them argued last summer. “If the rest of the world made just half Germany’s effort, the future for our planet would look less bleak,” she wrote. “So Germany, don’t give up. And also: Thank you.” But Germany didn’t just fall short of its climate targets. Its emissions have flat-lined since 2009.

The stage is set: everybody’s favorite renewables producer has fallen flat on its face. And don’t forget, Angela Merkel, the Mutti behind the Energiewende, is a physicist by training. Thermodynamics must have been a class she missed.

Germany has already spent $180 billion on its switch to renewables, only to find it doesn’t work. And much much more will be needed. But for what exactly?

Over the past five years alone, the Energiewende has cost Germany €32 billion ($36 billion) annually, and opposition to renewables is growing in the German countryside. “The politicians fear citizen resistance” Der Spiegel reports. “There is hardly a wind energy project that is not fought.” In response, politicians sometimes order “electrical lines be buried underground but that is many times more expensive and takes years longer.” 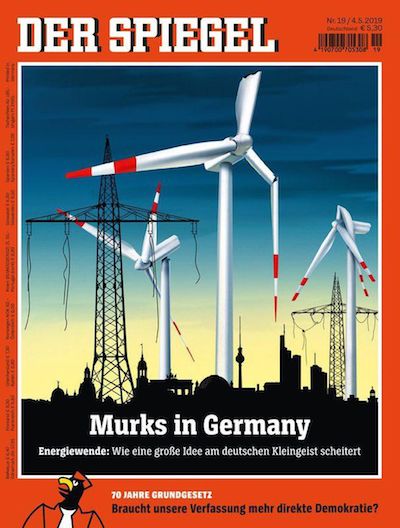 As a result, the deployment of renewables and related transmission lines is slowing rapidly. Less than half as many wind turbines (743) were installed in 2018 as were installed in 2017, and just 30 kilometers of new transmission were added in 2017. Solar and wind advocates say cheaper solar panels and wind turbines will make the future growth in renewables cheaper than past growth but there are reasons to believe the opposite will be the case. Der Spiegel cites a recent estimate that it would cost Germany “€3.4 trillion ($3.8 trillion),” or seven times more than it spent from 2000 to 2025, to increase solar and wind three to five-hold by 2050.

A total expenditure of some $150 billion per year, every year from 2025 to 2050. On a rapidly failing project. Note: the numbers are “flexible”: just above, it says “Over the past five years alone, the Energiewende has cost Germany €32 billion ($36 billion)” , and seven times that is much more than $150 billion annually. Later in the article, the author says “Germans, who will have spent $580 billion on renewables by 2025 ..” General rule of thumb: it will cost much more than any estimate will tell you.

Between 2000 and 2018, Germany grew renewables from 7% to 39% of its electricity. And as much of Germany’s renewable electricity comes from biomass, which scientists view as polluting and environmentally degrading, as from solar.

Of the 7,700 new kilometers of transmission lines needed, only 8% has been built, while large-scale electricity storage remains inefficient and expensive. “A large part of the energy used is lost,” the reporters note of a much-hyped hydrogen gas project, “and the efficiency is below 40%… No viable business model can be developed from this.”

Meanwhile, the 20-year subsidies granted to wind, solar, and biogas since 2000 will start coming to an end next year. “The wind power boom is over,” Der Spiegel concludes.

Think Mutti Merkel has read this?

.The earliest and most sophisticated 20th Century case for renewables came from a German who is widely considered the most influential philosopher of the 20th Century, Martin Heidegger. In his 1954 essay, “The Question Concerning Technology,” Heidegger condemned the view of nature as a mere resource for human consumption. The use of “modern technology,” he wrote, “puts to nature the unreasonable demand that it supply energy which can be extracted and stored as such..

But then starting around the year 2000, renewables started to gain a high-tech luster. Governments and private investors poured $2 trillion into solar and wind and related infrastructure, creating the impression that renewables were profitable aside from subsidies. Entrepreneurs like Elon Musk proclaimed that a rich, high-energy civilization could be powered by cheap solar panels and electric cars.

Journalists reported breathlessly on the cost declines in batteries, imagining a tipping point at which conventional electricity utilities would be “disrupted.” But no amount of marketing could change the poor physics of resource-intensive and land-intensive renewables. Solar farms take 450 times more land than nuclear plants, and wind farms take 700 times more land than natural gas wells, to produce the same amount of energy.

Note: these issues only arise when you talk about large-scale projects, but then those are the only ones even considered.

Efforts to export the Energiewende to developing nations may prove even more devastating. The new wind farm in Kenya, inspired and financed by Germany and other well-meaning Western nations, is located on a major flight path of migratory birds. Scientists say it will kill hundreds of endangered eagles. “It’s one of the three worst sites for a wind farm that I’ve seen in Africa in terms of its potential to kill threatened birds,” a biologist explained.

We are incapable of seeing an ecosystem as a whole and functioning entity, because we have never learned to look at things that way. So we see a landscape as containing an X-amount of animals and plant life, and can’t figure out why we must be careful with its balance. Landscapes to us look, first, empty, unless there’s -lots of- human activity.

Heidegger, like much of the conservation movement, would have hated what the Energiewende has become: an excuse for the destruction of natural landscapes and local communities. Opposition to renewables comes from the country peoples that Heidegger idolized as more authentic and “grounded” than urbane cosmopolitan elites who fetishize their solar roofs and Teslas as signs of virtue.

Germans, who will have spent $580 billion on renewables by 2025, express great pride in the Energiewende. “It’s our gift to the world,” a renewables advocate told The Times. Tragically, many Germans appear to have believed that the billions they spent on renewables would redeem them. “Germans would then at last feel that they have gone from being world-destroyers in the 20th century to world-saviors in the 21st,” noted a reporter.

Germany to save the world. Yeah, they would love that. Better find another project for that, though. Germany has an enormous car industry, and electric cars, as this article should by now have shown, won’t save the environment. They can’t. Only not driving a car can.

Shellenberger then finishes with a nice, almost philosophical conclusion, which is also his headline:

Many Germans will, like Der Spiegel, claim the renewables transition was merely “botched,” but it wasn’t. The transition to renewables was doomed because modern industrial people, no matter how Romantic they are, do not want to return to pre-modern life. The reason renewables can’t power modern civilization is because they were never meant to. One interesting question is why anybody ever thought they could.

The reason why anyone ever thought renewables could power modern civilization is the same that Angela Merkel thought that: we all learn from failing education systems and have a very poor understanding of even the most basic principles of physics, including by physicists. We want to feel good more than we want reality.

But look at it this way: in Nate Hagens’ presentation Earth vs. The Amoeba, which I posted a few days ago, there’s a slide that says fossil fuels provide us with a labor subsidy of the equivalent of some 500 billion people, 100 people (energy slaves) for each of us in the global workforce, and many more in the west. Is there anyone amongst you who thinks wind and solar could ever do the same, even in the most ideal conditions imaginable?

If not, it would seem to be time to reconsider a few things. First of all: stop advocating renewables, start advocating the use of less energy. I’m not saying it will be much use, I have this deep-seated fear that we, as a species, won’t be able to stop until nature itself stops us. What you don’t use, someone else can and will. But renewables are now dead. So there. Thanks for making that clear, Mutti, even if you didn’t mean to.

Trump to the Barricades

Here’s my reunion with Wall…

How the Richest 1 Percent…

What the Fact?! Reacting to…

A Tale of Two PandemicsNo…

A Heartfelt thanks to Elizabeth Warren