As countries develop, they face a choice: cash in on productivity gains as increased income or to enjoy increased leisure. That leisure means not only shorter workdays or a shorter workweek, but also longer vacations, more paid holidays, paid family and medical leave, and other time off. Choosing the latter, reducing annual work hours, is better for the climate than favoring long work hours and a high-consumption economy.

Over the last 36 years, productivity, measured by Gross National Income (GNI) per hour of work,  has doubled in the United States. Over the same period, however, the total number of hours per worker has hardly budged.

It has not always been this way.

Productivity doubled between 1950 and 1982, but workers put in 233 fewer hours in 1982 than they had 32 years prior. Hours per worker fell more than 10 percent. In effect, workers collected some of the productivity gains as time off work.

The US decline in hours of work over those decades was fairly typical of high productivity growth countries. In comparison with other countries at similar levels of productivity, the US was consistently middle-of-the-pack in terms of hours. In general, among these countries, hours per worker decreased as productivity increased. 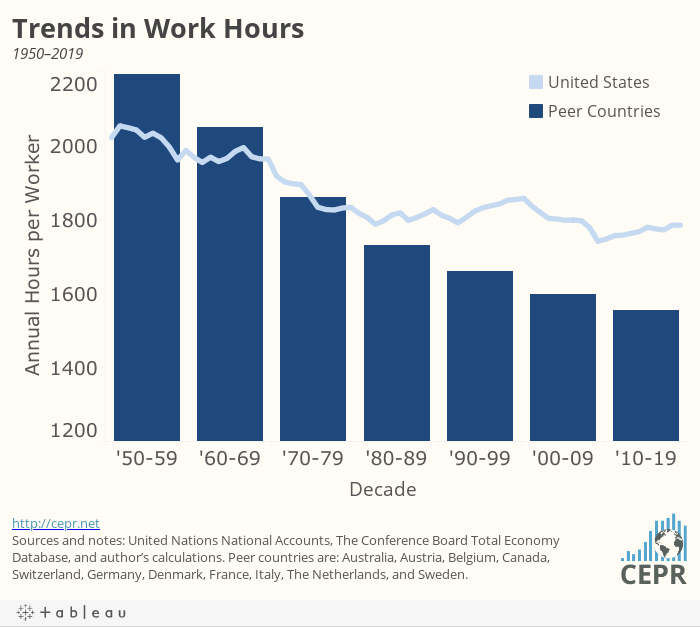 In recent decades, while other high productivity countries have continued to reduce hours as productivity increased, this trend has come to a halt in the US. America is an outlier. Today, workers put in more hours than do workers in other countries with reasonably similar productivity performance.

This is a clear policy choice. Even if we accept a standard eight-hour-five-day workweek, a quarter of workers in the United States have zero paid vacation or holiday. By contrast, other developed countries legally require employers to provide paid time away from work. American workers have yet to win legally required paid vacations, paid holidays, and paid family and medical leave that would reduce work hours and deliver some of the fruits of higher productivity in the form of greater leisure. At the same time, they have not seen increases in pay that are anywhere near commensurate with productivity gains. Despite the doubling of productivity since 1982, the average inflation-adjusted weekly earnings for production workers in the United States is up only 11 percent. Had the US enacted policies to reduce hours, the majority of workers would have received a more equitable share of the gains.

Moreover, the failure to reduce hours has consequences for climate change. Today’s carbon footprint is strongly related to current hours worked and aggregate output. In turn, climate change is directly related to the total amount of carbon emitted into the atmosphere. Reducing hours of work lowers the rate of emissions and provides valuable time to restructure the economy away from carbon-dependent production.

The US has set a very poor example. Other countries would do well to follow the alternative path and enjoy some of their productivity gains in the form of more leisure. The United States — for the sake of its workforce and the world’s climate — ought to do likewise.