A U.S.-listed company that reached a $4 billion market value based on its plans for a river port in the central China city of Wuhan announced Thursday that its dream had fallen through. Yangtze River Port and Logistics (YRIV) said that it failed to close its purchase of a small shipping terminal and would abandon the deal. 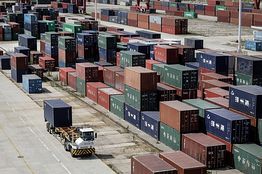 The dead deal makes Yangtze River’s stock price even more tenuous than it was in August, when Barron’s questioned why the company wanted to swap its existing business, plus $90 million, for the money-losing shipping terminal that Yangtze appraised as worth just a quarter of Yangtze’s stock market value. In mid-day trading Thursday, Yangtze shares were up 0.5% to $11.47—little changed from their August level that valued the company at $2 billion. The one paragraph announcement said that Yangtze couldn’t obtain a fourth extension of the deadline for closing the deal, which had already been extended three times since Yangtze arranged the transaction in December 2017.

The Nasdaq-listed Yangtze had hoped to come up with the agreed-upon $90 million by selling up to $300 million worth of stock here in the U.S., but the U.S. Securities and Exchange Commission has yet to give a green light to the stock offering’s registration statement. As of June, Yangtze’s quarterly filings showed it with $130,000 in cash and still no revenue nearly three years after becoming a public company through the backdoor route of merging into a U.S.-registered shell company. In 2016 (under a prior name), Yangtze said it had obtained $1 billion in financing from an American conglomerate, but that deal also failed to pan out.

The latest deal’s collapse leaves Yangtze with its original property in Wuhan, which its June balance sheet valued at almost $400 million but has yielded no revenue in three years and—as we reported in August—is saddled by over $100 million in unsatisfied judgments that Chinese courts assessed against Yangtze’s local subsidiary.

In a text message, Yangtze’s director and New York-based spokesman James S. Coleman said that he wouldn’t be immediately available to discuss the firm’s plans.