Home /After the Bell: How the Dow Jones Industrial Average Sashayed Clear of the Tech Wreck


Tech Wreck. Congressional testimony by Facebook’s Sheryl Sandberg and Twitter’s Jack Dorsey was blamed for hitting tech stocks hard on Wednesday, causing the Nasdaq to close down more than 1%. The Dow Jones Industrial Average finished higher despite losses in Asia that led to fears of an emerging markets contagion. Here are a few more things to know. In today’s After the Bell, we… 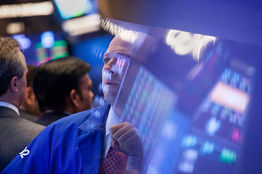 •…explain why there was more to the tech selloff than just the testimony in Washington;
•…marvel at the wreckage in some of the market’s best-performing stocks;
•…and wonder if we might finally see a value-stock rally.

That Got Ugly, Fast

You’re going to hear a lot about how the testimony of executives from Faceook (FB) and Twitter (TWTR) before Congress rocked the tech sector today. Don’t buy it.

But a look at the 15 worst-performing stocks in the S&P 500 tells a different story. Yes, Twitter is there—down 6.1% to $32.73—but so is Netflix (NFLX), Arista Networks (ANET), Micron Technology (MU), PayPal Holdings (PYPL), and Visa (V). Not one of those stocks has regulatory risk associated with the social-media giants. That tells you investors were driven by something more than regulation.

And what it looks like is investors dumping all their momentum stocks all at once. The iShares Edge MSCI USA Momentum Factor ETF (MTUM) dropped 1.7% to $116.54 on Wednesday, while the Invesco S&P 500 Momentum ETF (SPMO) fell 1.1% to $39.61. Just five stocks in the former finished positive, while only six stocks in the latter finished in the green. Both funds contain oodles of Netflix, Amazon.com (AMZN), Visa, and PayPal, among others. Notice too, that the Dow is light on most of those names.

Strangely, the better the economic news, the worse it could be for these high-momentum growth names. “Counterintuitively, a decline in the frequency of small shocks would increase downside risk,” writes Evercore ISI’s Dennis DeBusschere. “A scenario in which U.S. wage growth increases, the unemployment rate continues to decline, stimulus measures in China start to positively impact global growth, the U.S.-China trade war deescalates, and the Fed commits to letting inflation overshoot would likely come with fewer economic shocks. If that happens, the term premium should increase as inflation and Fed rate hike expectations move higher.”

If that were the case, those out-of-favor names might finally catch a break. You know them as value stocks.